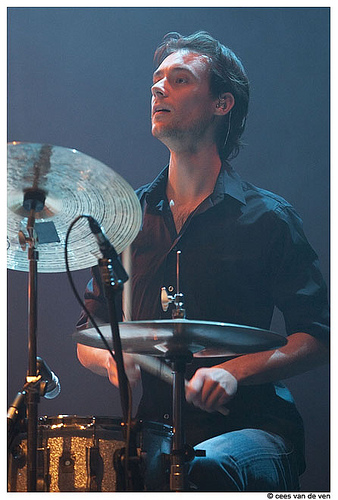 Jasper was born 19 september 1981 in Breda, the Netherlands.

From an early age Jasper already showed a strong reaction to almost every sound, and he appeared to have a very good hearing. There was always a lot of music and instruments in the house. From the moment his dad gave him his first washing-powder-box-drumkit, his future was determined: from seven years old he starts taking drumlessons at the local music school.

Ten years later he is admitted to the Rotterdam Conservatory, where he graduates in 2002 as a bachelor in music. While studying drums and music, he starts building up his network on numerous jamsessions, and already plays frequently with numerous bands in various styles such as pop, jazz, latin-american, etc.

His professional career took off with a bands like “The Young Sinatras” and “Sensual”, playing on almost every jazzfestival in the Netherlands. Meanwhile, many other bands started to develop, giving Jasper the chance to gain a lot of experience and find his way in music. And also to grow as an all-round musician and record many albums, always approaching music with an open mind, looking for sound, harmony and unity.

Now his current bands include ‘Eric Vloeimans Gatecrash’ (electro-improvised music with one of Europe’s leading trumpetplayers) and Wouter Hamel, a dutch singer/songwriter. With these bands Jasper recorded award winning albums and is playing in clubs, theatres and festivals throughout the Netherlands and Europe, but also in Japan, south Korea, Indonesia, India, South-Africa, USA, etc.