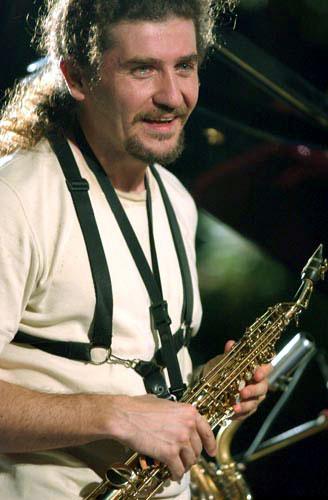 Javier was born in Cordoba(Argentina) the 17th april 1965. He is now an Italian citizen residing in Rome.
He signed up at the music school “Conservatorio Provincial De Cordoba” and followed the classical transverse flute class and the calssical clarinet class completing five years of schooling.
After a big experience in Argentina,At the age of nineteen Javier followed a seminar in Buenos Aires held by the Berklee College of Music which awarded him a place at the Berklee College of Music in Boston, U.S where finished the 4 year “Professional Music” course with honours. He also improved his music writing and arranging skills learnt in school through performing with artists such as Danilo Perez, George Garzone, Hall Crook, Bob Moses, Herb Pomeroy,Bob Moses, and other local musicians.
At the age of 25 Javier travelled to Italy for the first time to visit his grand parents’ country of origin and fell in love with Rome, where he decided to stay. The first one he put together in 1992 was called “Tercer Mundo” together with Horacio “El Negro” Hernandez, a sextet including piano, bass, percussions, drums, trumpet and sax. He also started writing music and arrangements for a new group called “Six Sax”, a quartet of two saxophones, bass and drums. He recorded his first CD under this name with guest stars such as Bob Mintzer and Randy Brecker. Mixing his argentinian roots with jazz came naturally to Javier who went on creating arrangements and music that made his name famous among jazz artists, recording seven CD in the following years with his definite group “Aires Tango”, a quartet formed by his sax, percussions, bass and piano.

His style gained him the requests of bigger names in the Italian jazz industry such as Roberto Gatto, Rita Marculli, Enrico Rava, Paolo Fresu, Peppe Servillo, Antonello Salis, Bebo Ferra and others.
Between 1999 and 2000 he gained much popularity, being requested for numerous gigs within Italy and outside, broadening his professional experience and curriculum, in particular the duo with
Daniele di Bonaventura (bandoneon) with whom he recorded two CD with the support of an orchestra and the duo with Luciano Biondini (accordion).
2000 became part of the ONJ (Orchestre National du Jazz du France)
2002 becam member of Enrico Rava’s quartet “Piano less”